One of the most tragic aspects of our culture is the amount of time and effort invested in blame games: people endlessly pointing the finger of blame at each other. Why do we waste so much of our precious Life Energy making each other wrong?

The impulse to blame others begins with a “negative” feeling in oneself. The feeling may be simple frustration with life conditions (you want to sunbathe but it’s starting to rain) or a fear of being blamed or judged yourself (as when your child is “misbehaving” in public). Instead of appreciating the feeling as a form of inner guidance, you’ve been trained to take it personally: “something feels wrong” becomes “something is wrong with me!”

When you blame, you’re trying to get rid of the feeling that something is wrong with you by assigning the wrongness to someone else.

In the sunbathing example, the blame might be something like, “If YOU hadn’t made such a huge mess I could have sunbathed before the rain started!” In the misbehavior example, blame usually takes the form of a public reprimand or shaming, the unconscious purpose of which is to make onlookers think that the wrongness is in your child and not in you.

So blame is ultimately a tool for purging or deflecting psychic toxins by projecting them onto someone else. Blaming is a way of saying, “There’s nothing wrong with me; it’s YOUR fault!” It’s like the “hot potato” game: when the imaginary hot potato is passed to you, you have to pass it quickly to someone else or you’ll get burned.

But when the recipient of blame is a little child, he can’t pass it on so easily, so he internalizes the sense of wrongness. However, the need to purge it doesn’t go away. It leads to habitual blamefulness, and eventually his own children become the targets. Thus, “the sins of the fathers are visited upon the sons.”

This is not to say that blame is “wrong.” That would only lead to more blame! The underlying motivation of blame — to restore the feeling that “all is well” and “I’m okay” — is a healthy impulse. So it’s better to take the view that blame isn’t wrong, it just doesn’t work in the long run. Why? Because when you deflect wrongness to others, it will eventually find its way back to you. Blame is especially ineffective when the recipient is a member of your family, because the wrongness remains literally “close to home.”

Once you understand the root of blame, you can render it obsolete by learning to hold presence with “negative” feelings. The ability to stay present with such feelings is like an insulated glove that enables you to hold a hot potato until it cools down instead of throwing it to someone else. Blame transfers the feeling of wrongness to others, but Presence transforms it into healing and wisdom.

Ideally, holding presence while feeling “negative” emotions is a skill that’s passed down from parents to children. When a child is upset, hurt, or frustrated, the parent holds presence with the child’s feelings until the child internalizes the skill and can do it for herself. When parents can do this it’s because their parents did it for them. That’s what nature intended, but this natural order was disrupted many, many generations ago, which means that we must “bootstrap” the cycle to restore it.

So how do you learn to “hold presence” with “negative” feelings in yourself? It’s actually very simple: the main ingredients are self-awareness and courage. You have to be aware that you ARE feeling something, and you have to be willing to stay with it despite the fear that it might be painful. There’s no avoiding the leap of faith this requires. You have to trust that Life has your best interests in mind when it presents you with unpleasant feelings.

When you find the courage to say, “Okay, Life... Bring it on!” a “negative” feeling will transform into a blessing. You’ll realize that if you had deflected the feeling through blame, you would not have received the gifts of a feeling process that’s supported by Presence. These gifts include wisdom, guidance, clarity, relief, healing, empowerment, authentic responsibility, and increased courage.

One of the best ways to cultivate the self-awareness and courage needed to master the skill of holding presence is to practice with a partner who is also committed to mastering the skill. This can be done informally with friends, where you ask them to listen compassionately or simply “be there” for you when you’re upset, and vice versa. (And you deliberately avoid commiserating, which is subtle form of blame.) Holding presence with a partner is also a part of many formal techniques, such as Focusing and The Work, both of which can be done with a partner or alone, with you as your own partner.

Another good way to cultivate the courage to hold presence with unpleasant feelings is to make a game of it! In other words, you can challenge yourself by deliberately doing things that make you feel a little uncomfortable and staying present until the compulsion to avoid the feeling subsides. These challenges can be silly or serious, but they should not cause a lot of anxiety, nor should they pose any real dangers. Getting through them should make you feel exhilarated, not traumatized.

With practice, you’ll come to know what it feels like to be comfortable with being uncomfortable! That freedom will become the foundation of your ability to hold presence with any feeling — both in yourself and in your child. The “need” for blame and accusation will continually decrease, until it starts to feel like the blameful you is the old you, and the NEW YOU simply knows that All Is Well.

BTW, the phenomenon of self-blame is not quite the same as the “other-blame” described above, but it’s close enough that holding presence will transform it, too.

ALSO, please note that ending the blame game does NOT mean tolerating violence. When you hold presence with feelings about an act of violence, you often receive guidance to take action that would end the violence. The difference is that when you haven’t deemed the perpetrator to be “wrong” or “evil,” you are better able to see the path to safety and healing for all.

Groove It !
To apply the ideas above, see these Grooves...
Presence: The Cure for Blame  ▪  Beyond Blame: Holding the Hot Potato  ▪  Free Your Child (and Yourself) from Blame
Subscribe to The Daily Groove...
Share It ! 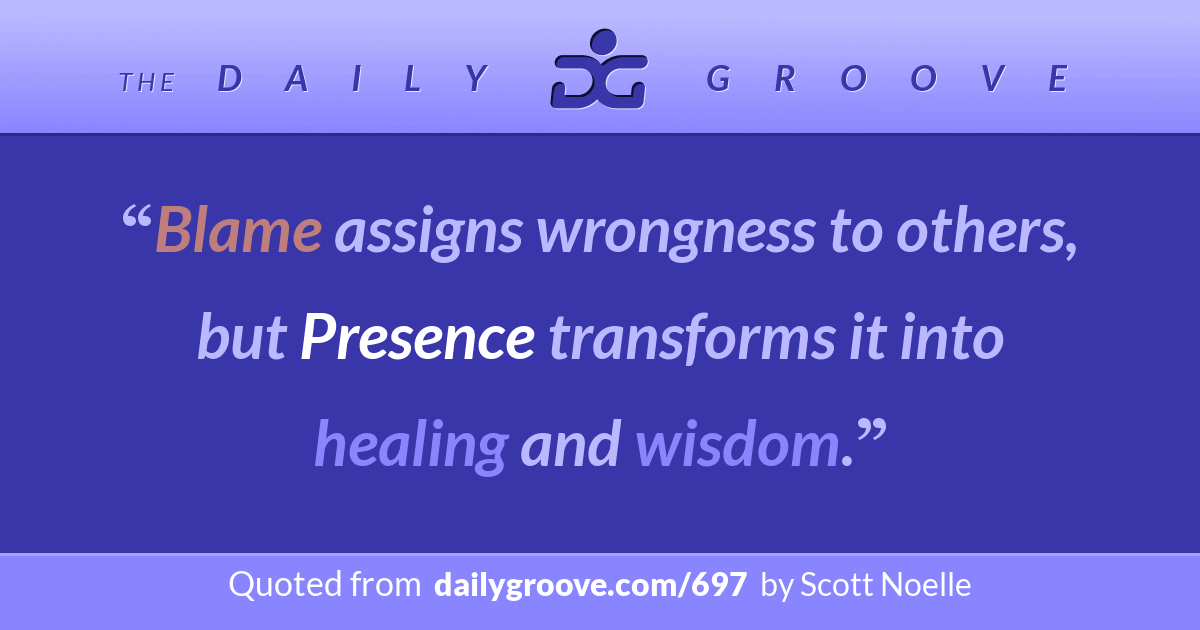 Check-in: Finding My Own Groove
From Blame to Real Power