From Control to Leadership

Q:  After reading about pseudo-power I realized I was using it while rushing my son off to school. How do I get my kids out the door to school without controlling the slow pokes with no sense of time? :)

I’m not suggesting that these are your intentions, but you may be participating in control games that feel “natural” because you’ve never experienced a world without them. So if you’ll allow me to indulge in a bit of cultural criticism, I promise we’ll get to a more empowering, practical solution.

Is school itself the problem?

Do you accept that the institution of School is a domination system? If not, please watch Ferris Bueller’s Day Off at least twice — here’s a clip — or better yet, read How Children Fail by John Holt. Except for a small number of alternatives, modern schools are devoted to controlling what, when, how, with whom, and from whom children learn.

(Note for schoolteachers: I have great respect for anyone who is devoted to enriching the lives of children. My criticism is aimed at the dysfunctional system that so often prevents sincere teachers from being true to the art of teaching.)

Public schools in America have become so obsessed with behavior management that the goal of learning is all but forgotten for those students who don’t readily conform. Public humiliation, bribe-like reward systems, and mind-numbing drugs have become the go-to solutions rather than the last resorts in many schools. In some ways, children in school have less freedom than imprisoned criminals, yet very few people consider it unjust. School is considered to be harmless or, at worst, a necessary evil, because we’ve been conditioned to accept certain myths about schooling:

Myth: Without schooling, children can’t learn what they need to learn.

Truth: Children are born to learn. For millions of years, we humans and our antecedents have survived and thrived largely due to our extraordinary capacity to learn — mostly through observation (modeling), participation (mentoring), and play. Even after the invention of reading, writing, and arithmetic, people learned literacy and numeracy skills for thousands of years without anything resembling today’s factory-style, compulsory schooling. When children are surrounded by elders who are thoughtful, engaged, life-long learners, they can’t not become engaged learners themselves.

Myth: We have to use force and manipulation to get kids to learn because learning is unpleasant (hard, painful, boring, etc.).

Truth: When you take the force and manipulation out of education, learning happens naturally, willingly, and joyfully. There are three main requirements for this to work: (1) Give kids the freedom to decide what knowledge they will pursue, when they will pursue it, and how they will explore the world and master the skills that will empower them in life; (2) give them access to a variety of resources like libraries, art supplies, playmates, the outdoors, and the internet; (3) expose them to a variety of wonderful experiences, environments, and people who exemplify empowered living.

What is hard, painful, and/or boring is being forced to learn something that you either don’t care about or aren’t ready to learn. When education is forced, children learn what no one wants to learn: that they are powerless and their hearts’ desires don’t matter. But when children have an authentic desire to do something that involves learning, and they’re empowered to go with their desire, the learning feels more like play than work — even if great effort is required.

This is not just a theory or wishful thinking. Through homeschooling and other alternative educational paths, millions of families have proven that children can learn without the coercive, top-down model of conventional schooling. My own two children, now teenagers, are self-directed learners (technically, homeschoolers) who learned to read and write with only a few hours of casual instruction; most of their literacy skills have been gained on the fly by following their curiosity and asking questions when they couldn’t figure things out on their own. We didn’t have to threaten or bribe them to learn those skills because we trusted that they would see how we are empowered by literacy and they would want that power for themselves.

The point of all this is to explain why, for most children, school and its trappings are opposed to their natural inclinations. If your son is being a “slow poke,” he probably just doesn’t want to go to school. Do you think he’d be so slow if you were going to a toy store?

But let’s just say that he doesn’t mind going to school. Perhaps he has somehow figured out that school is just a crazy game that most people have mistaken for serious business, and he has devised his own set of rules to make the game fun. Maybe the problem is just that he has “no sense of time.”

Here’s a good rule of thumb: When you think your child doesn’t understand reality, ask yourself if you understand his reality. “No sense of time” really means no civilized/adult sense of time. Younger children have a different sense of time that is more natural and more focused in the present. Child time is based on feelings, natural rhythms (like day and night), and natural drives (like hunger and curiosity), whereas adult time is an intellectual construct with more focus on the past and future than the present.

When you look at the clock and deduce that the school bus will arrive in five minutes, saying “it’s time to go to school” makes complete sense to your logical, adult mind. But your son doesn’t look to the clock to verify that statement, he checks in with his body to compare the feeling of “go to school” with that of staying in his present flow. If the thought of going feels worse than staying, then “it’s time to go” is obviously not true in his experience. When this happens, he has to conclude that you are wrong -OR- that his own inner guidance is wrong. Either way, it will create in him a growing sense of disconnection.

Fortunately, you have the power to prevent the disconnect and deepen your bond instead. The key is to take his perspective first — expand your truth to include his truth before you say a word. Instead of insisting that it’s time to go to school, this approach might lead you to engage in a conversation that goes more like this:

“I see you’re really enjoying that activity!” (You take a moment to be fully present and appreciate his flow, then add...)

“You’re gonna see your friends on the school bus. Are you looking forward to that?” (Let’s say he answers yes.)

“The bus will be here in five minutes, but you look like you could enjoy that activity for hours!” (In other words, you acknowledge that he probably has conflicting desires instead of telling him he has to go.)

“But if you don’t go now, you’ll miss the bus and you won’t get to see your friends.” (Again, pausing to hold presence with him as he feels into the dilemma.)

“I wonder if you could put this activity on ‘pause’ and then ‘unpause’ it after school. Then you’d get to enjoy your friends AND this activity.” (Your tone is not pushy, it’s curious. You want to help him solve the dilemma, but you aren’t attached to him buying your solution.)

If this kind of creative, respectful, supportive interaction doesn’t lead to him feeling inspired to catch the bus in time, then perhaps there’s a valid reason he shouldn’t go and he simply isn’t able to articulate it. Regardless of the outcome, by keeping your heart open and not forcing him to comply, you are building a strong foundation of partnership and trust, and this will pay off later in a big way.

One of the greatest benefits of a partnership approach is that you’re constantly modeling empathy and higher consciousness: having a big-picture, holistic point of view. If your son develops these mental and emotional skills before his adolescence, his teenage years will be significantly easier for you as a parent, and more satisfying for the whole family.

Does this approach spoil children?

Many parents believe that if children aren’t forced to comply with various expectations and requirements, like attending school and doing chores, they will be “spoiled.” But a “spoiled” child is actually a spoiled relationship in which both child and parent are disconnected from their power. As long as you stay connected to your Authentic Power, the only thing spoiled by a partnership approach is the domination system you are abandoning.

It’s true that young adults who were raised in partnership mode often can’t hold a job with a controlling employer, but isn’t that a good thing? They know the difference between true leadership and mere controlling.

A true leader serves her followers by staying attuned with them and making sure her leadership supports their hearts’ desires. Most people, including children, will not resist that kind of leadership. In fact they crave it!

UPDATE:  An astute reader, referring to the scenario above, asked how the mother might respond if her son said he didn’t really care about seeing his friends on the school bus.

What I ought to have added to the scenario description was that the mother already knew her son enjoys seeing his friends on the bus, which is precisely why she brought it up. She used her knowledge of him to help him maximize his enjoyment of the day, not to manipulate him into doing something he dislikes.

If the boy had made it clear he’d rather stay home than to go to school, then the mother would have to make a crucial decision: stay in partnership mode or resort to control tactics. The child’s school, the mother’s employer, and society in general, would all presume the “necessity” of controlling at this point, using threats, bribes, or even physical force to get compliance. But on the partnership path, the parent is committed to working with, not against, the child.

To follow this path, you have to value the dignity of your child more than compliance with society’s expectations. It may not be an easy path, but its rewards run deep. And it gets easier as you establish patterns of partnership and create structures that support it.

The best way to stay in partnership mode is to remember that your child’s “no” is always shorthand for “I can’t see how that is going to work for me.” With that interpretation, you will be less tempted to push for compliance and more inclined to look for a creative solution that works well enough for both you AND your child.

Groove It !
To apply the ideas above, see these Grooves...
The Big Picture  ▪  Your Child’s Dignity vs. Social Compliance  ▪  What Kind of Leader Are You?  ▪  Parenting: Take No Prisoners!*
Subscribe to The Daily Groove...
Share It ! 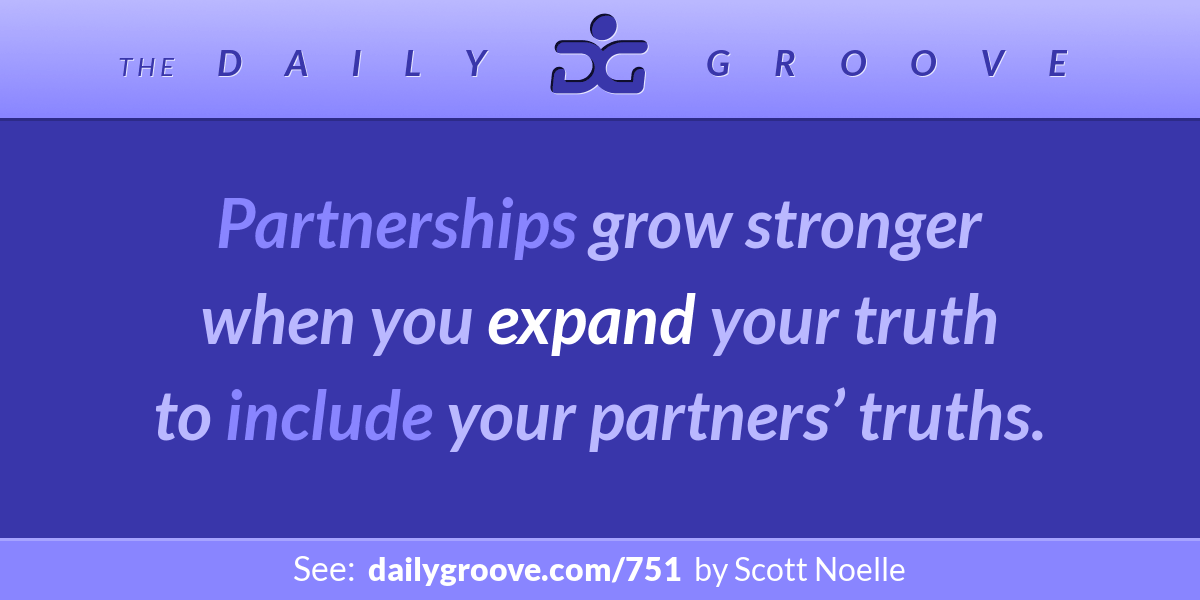 From Blame to Real Power
The Leading Edge