Over the years I’ve noticed that my unconventional views around parenting have made for some strange bedfellows. For example, being a homeschooler puts me in bed with religious fundamentalists who share my interest in educational freedom, despite extreme differences in the way we exercise that freedom. Similarly, my writing has attracted liberals, conservatives, Libertarians, Greens, atheists, Buddhists, pagans, technophiles, Luddites, working class, white-collar, etc...

What a motley crew we are!

Even though 99.9% of the Daily Groove reader feedback I get is positive, and I rarely hear from critics, it’s unlikely that any subscribers agree with everything I write. I expect you to take what you like and leave the rest. But last week one reader sent me a surprisingly vitriolic response to a recent post in which I mentioned Bernie Sanders, an American politician known for his left wing views. The post wasn’t promoting Sanders nor his views, per se, I was simply quoting a factoid I’d heard him repeat many times, using it as a launch point for a discussion about an entirely different subject.

But my critic (who unsubscribed from The Daily Groove and will likely not see this post) accused me of surreptitiously promoting Sanders’ “liberal agenda.” This critic assumed that if I agree with anything Sanders says, I must agree with everything he says. But guess what... I don’t! There are certain things I love about Sanders’ views. For example, he is the only presidential candidate I have ever heard speak about the importance of postnatal bonding between a baby and its parents. But he also advocates the expansion of government programs I dislike, including our current systems of education, childcare, and healthcare.

I can’t think of a single person or movement that I completely agree with, yet somehow I’m not filled with hate for everyone who isn’t me. Further, some of the people I most admire also happen to hold views I strongly disagree with. Why is it so hard for some people to accept and even appreciate differing views? I can think of at least two reasons.

First — judgmental, black and white, either/or, right/wrong thinking is embedded in our legal and political systems and many other institutions including mainstream education, religion, and parenting. These ways of thinking are reinforced through the media and entertainment industries, dramatizing the unending war against evil, and affecting every child old enough to understand that Santa Claus “knows if you’ve been bad or good.” Over time, this onslaught leads many people to develop a kind of hyper-righteous orientation that makes no room for gray areas. If you’re not 100% right, you’re 100% wrong — or nearly so. Through that lens, the prospect of a differing view being even partially right feels threatening.

Second — and even more basic — human children naturally go through a developmental stage in which they derive a sense of security from being the same as other community members. Ideally, children eventually mature in ways that allow for more sophisticated ways of feeling secure, so they aren’t afraid to be different and let their uniqueness shine. But the same institutions that reinforce polarized thinking also tend to undermine this maturation process. In my opinion, that’s why we still have large adult populations who are intolerant and — at the extremes — xenophobic, racist, or militant.*

If you want to increase your tolerance for differences, a good place to start is by identifying your strange bedfellows — groups or individuals with whom you have significant common interests AND some major disagreements — and decide to make the most of your times in bed with them. (Personally, I enjoy a bit of spooning.)

Unless you’re a five-year-old, sameness is boring. Differences are interesting and fun when you celebrate them instead of fearing them.

* 2021 Update:  When I wrote this, the 2016 presidential campaign was in full swing. Despite my efforts to write without a partisan bias, the phrase “xenophobic, racist, or militant” was clearly a reference to right wing extremism. I failed to see that the left had its own extremist tendencies that later expanded in reaction to Trump, e.g., toxic identity politics, cancel culture, and medical totalitarianism. These days, my bedfellows are even stranger: misfits who think outside the box of mainstream culture and the culture wars. 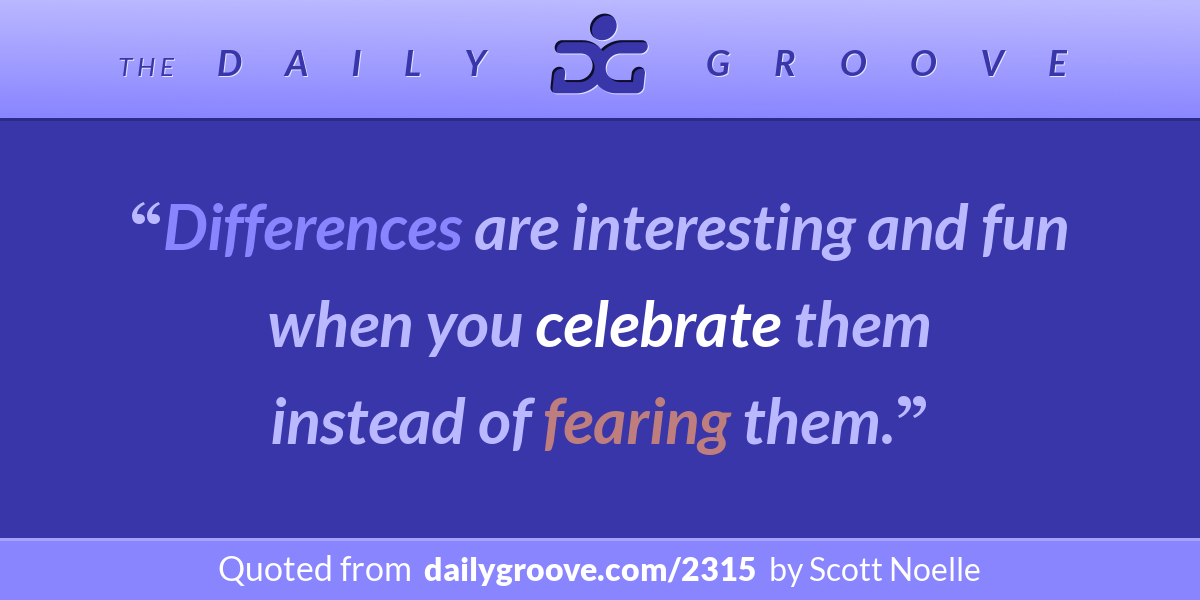