Power Confusion and the “Spoiled Brat”

Children who seem “rude” or “spoiled” often become that way because their parents are trying too hard NOT to be authoritarian. The parents are so worried about abusing their power that they disown it altogether. And when parents appear to be powerless — when they cease to be the powerful presence their children instinctively expect them to be — the children do whatever it takes to feel connected to some semblance of power. Since the children lack experience wielding power in a positive way, they often end up becoming “little authoritarians” — precisely what the parents themselves were afraid of becoming!

If you find those dynamics are at play in your family, the last thing your children need is for you to become a bigger authoritarian. What they need is for you to clarify for yourself the distinction between Authentic Power and “pseudo-power,” and reject the latter while embracing the former.

All of us have been indoctrinated from birth, to one degree or another, into the dominator paradigm of our culture. Marshall Rosenberg describes this process in his article, Anger and Domination Systems. In a nutshell, the system is perpetuated by making people feel like something is wrong with them, and that they can only redeem themselves by jumping through various hoops or behaving according to externally defined rules of conduct. Whoever buys into that lie can then be dominated by whoever makes and enforces those rules. This twisted game, when played by adults, is perpetuated by BOTH the dominator and the dominatee. (Any adult can end the game by simply choosing to stop playing).

Perhaps the greatest casualty of this indoctrination process is humanity’s innate understanding of POWER. Every child has an inborn sense of his or her Inner Power. They can’t put words to it, but they feel it, and it feels right. They naturally express their Power through their great capacity for joy, pleasure, passion, curiosity, enthusiasm, and desire. Or rather, they would express their Power through those channels if not for the way that the dominator system reacts when they do: with a resounding “NO!”

In other words, the agents of the system — including you, me, and everyone who’s been conditioned to see the world through dominator-colored glasses — habitually resist children’s expressions of Authentic Power. In the process, we teach them (either intentionally or inadvertently) that their Power isn’t authentic and that they need to pursue power — what I call pseudo-power — by being “good” as defined by the system.

Of course you and I don’t do this to our kids as blatantly as authoritarian parents do. In fact we do our best to avoid it. Nevertheless, the dominator memes are pervasive and insidious, and we perpetuate them in subtle ways.

For example, if you’re at a playground and your toddler gets excited and throws sand at another child, and your first thought is to worry about the other parents judging you, or to question your child’s innate goodness, (instead of thinking that the children just need help staying centered and developing partnership skills), then you are under the influence of the dominator worldview. And it’s human nature for children to sense their caregiver’s worldview and internalize it. That’s how we pass down memes to our kids without even trying.

When children’s expressions of Authentic Power (skilled or unskilled) are frequently met with resistance (subtle or blatant), they eventually develop a belief or sense that there’s something wrong with themselves... or their desires... or their Power. You can probably think of many instances in which that happened to you as a child. Most of us have a LOT of power locked away in our shadows — the exiled parts of ourselves that we disowned long ago in order to survive within the confusing dominator culture.

Being a consciously evolving parent can make your shadow issues emerge from the depths quite intensely. Challenging the status quo creates an inner confrontation between authentic freedom and obedience to social norms. In fact, confronting one’s shadows can feel so scary that most people who are “working on themselves” unconsciously avoid their shadows, often vigorously. They may use the excuse that they are trying to be “positive,” but they may also be plagued with feelings of inauthenticity (“niceness”), resentment, low-grade depression, or passive-aggressiveness. They don’t realize how much of their Power they could reclaim through shadow work and how it would transform their relationships.

(If you want to explore doing shadow work, I recommend Ken Wilber’s simple “3-2-1 Shadow Process,” and you might also want to read this article by Debbie Ford.)

So to put this all together...

When the dominator system confuses our understanding of power, many of us come to believe that power is bad, that it can’t be trusted, that it corrupts us. We then disown it in order to avoid being seen as evil tyrants, but we’re throwing out the baby with the bathwater: disconnecting from our Authentic Power as we reject the pursuit of pseudo-power.

This rejection of ALL power is very common with compassionate parents who are determined NOT to re-create the authoritarian parenting style of their parents’ generation. They are often reluctant to acknowledge their own limits and honor their boundaries for fear of causing their children’s sadness. It creates a power “vacuum” which is often filled (unskillfully) by their children, who are scared by the absence of Power where they naturally expect it to be.

A scared child who seizes power is often seen by others as a “rude” child or “spoiled brat.” The conventional response is that such children “need to be shown who’s the boss!” But they don’t need to be dominated, they need the presence of loving, empowered partners. They need parents who are willing to face their shadows and own their Authentic Power. 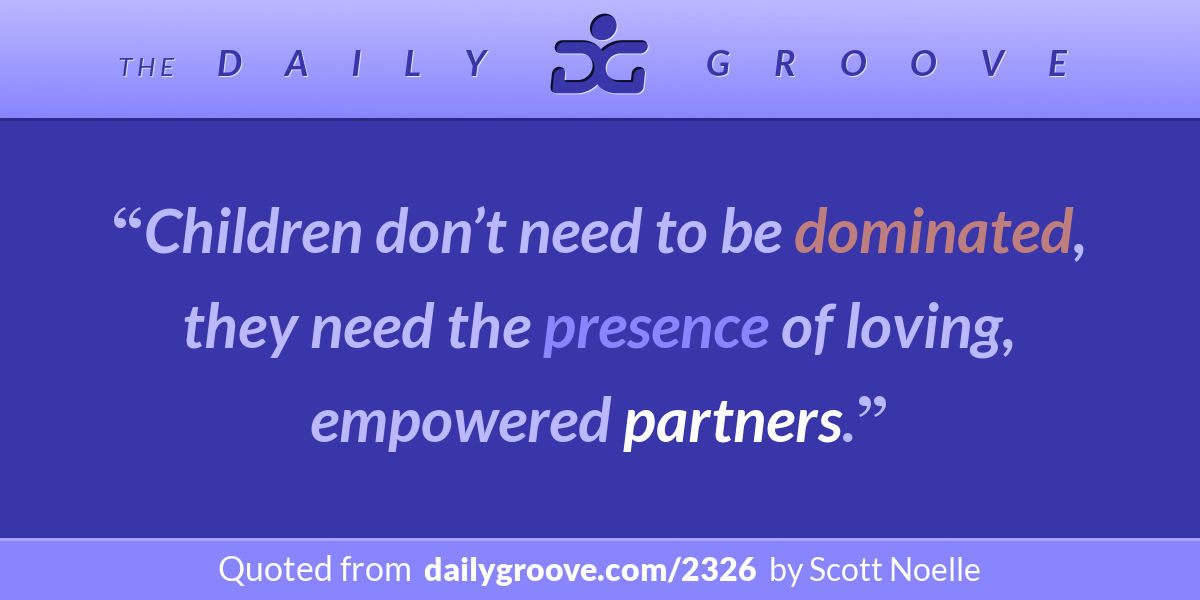 A Christmas Wish
More Power for the Holidays